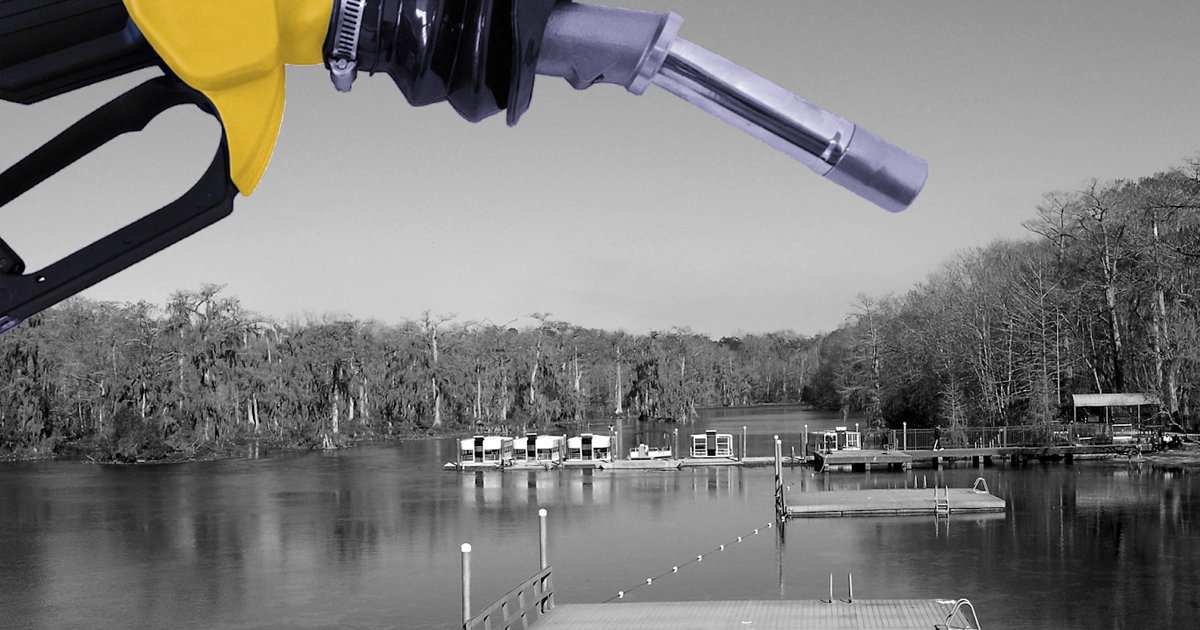 | So much for the Springs |

The proposed gas station poses a “truly grave threat” to the springs, according to the official nonprofit partner of Wakulla Springs State Park.

Even on a chilly February morning, Wakulla Springs sparkles. From the dive tower, cypress limbs sway at eye level as manatees surface to breathe, leaving behind puffs of steam. It’s a timeless scene, but this ecosystem is changing. In recent years, the water has gotten darker, the river grass thinner and the wildlife more scarce. Now, more change could be coming in the form of a new gas station that locals expect to further damage the Wakulla River.

The water that flows out of Wakulla Springs first falls as rain, much of which lands in Tallahassee before trickling into a series of underground caves and flowing south. Within this network are a handful of major conduits—effectively subterranean rivers—that carry high volumes of water to Wakulla Springs. It is above one of these tunnels that Southwest Georgia Oil Company wants to build a 16-pump mega gas station, convenience store and car wash.

The proposed gas station poses a “truly grave threat” to the springs, according to the official nonprofit partner of Wakulla Springs State Park. The group called the Friends of Wakulla Springs, penned an open letter to the county identifying two major hazards: a steady stream of runoff and possible tank failures. They noted that the property’s sandy soil would usher toxins to the cave on a daily basis, while storage tank malfunctions could inflict “catastrophic and irreparable harm to Wakulla Springs.” Meanwhile, a Wakulla-focused scientific group cited evidence that pollution entering the cave would reach Wakulla Springs after just eight days, and the president of the Florida Wildlife Federation noted the “inherent threat” to an “internationally recognized ecological jewel.”

On Tuesday, February 22, the Wakulla Board of County Commissioners will vote on the first phase of the project: an amendment to the county’s comprehensive plan to let Southwest Georgia Oil circumvent current zoning laws. It is not yet clear where most commissioners stand on the issue. Commissioner Mike Kemp says he is still studying the proposal, while Commissioners Randy Merritt, Ralph Thomas and Quincee Messersmith did not respond to a request for comment. Commissioner Chuck Hess, a retired wildlife scientist, called the project “irresponsible.”

Diver inside the cave in question, taken by the Woodville Karst Plain Project

A Series of Pollution Controversies

This is the latest in a string of water pollution issues in Wakulla County. Just yesterday, the county agreed to a penalty valued at $29,250, enforced by the Florida Department of Environmental Protection (FDEP), for excessively polluting Wakulla’s groundwater with nitrogen from municipal wastewater. The owner of the engineering firm assigned to the wastewater contract has a history of hosting Wakulla’s top bureaucrat, County Administrator David Edwards, at his Pensacola beach house.

Just over a year ago, Edwards was part of a plan to buy land with groundwater openings from a former commissioner so that the county could build a wastewater dumping site. An outraged public pointed to the high purchase price and the risk of pollution at Wakulla Springs, but the project saw support from Commissioners Kemp, Merritt, Messersmith, and Thomas. Last summer, the plan was paused, amid public pressure, when a study found the land to be flawed. By then, the property had already been purchased.

Mobilizing Against the Gas Station

Pointing to the wastewater outcome, a group calling itself Clean Water Wakulla says that the commissioners can be successfully persuaded by community input. The organization is now opposing the gas station proposal, encouraging Wakulla and Leon residents to get involved by attending two upcoming board meetings and emailing the commissioners.

Some residents expect that county officials will try to sugarcoat the deal, promising that the fuel tanks won’t be directly above the cave but merely near it. “That’s a nonsense strategy,” says Peter Scalco, a retired manager of Wakulla Springs State Park who spent three decades with FDEP. “In sand, pollutants move diagonally. Accidents will still be possible and runoff will be a sure thing.” He added, “At these meetings, folks need to show up in force.”