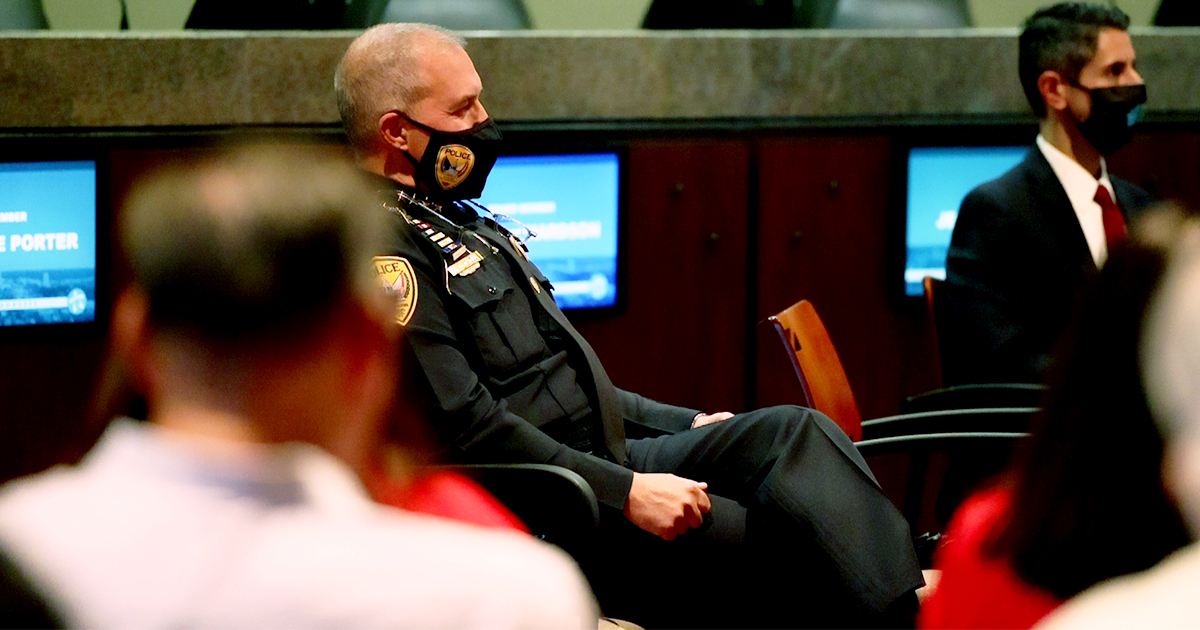 Revell has come under intense public scrutiny and media attention following OurTallahassee’s coverage of his appearance.

The Mayor’s Advisory Council meeting had to be moved from the Tallahassee Room to the much larger City Commission Chambers to accommodate the overflow crowd of the typically small gathering of the advisory council. The chambers were filled primarily with fellow churchgoers and friends of Revell. Many of the attendees could be seen mingling with Revell after the meeting. One speaker, Lakey Love pointed out that the vast majority of those in attendance who came to support Revell refused to wear masks.

One speaker, who only gave their first name as Terry, spoke in support of Revell and ended his comments with “that’s what they do in China,” referring to the public criticisms of Revell’s appearance.

More than one speaker, testifying in support of Revell, claimed that Christians are obligated to speak out to gay people, out of concern for their salvation in heaven.

“When Christians speak against a sin, that they see someone committing, it’s out of genuine concern that they won’t see someone in heaven,” David De La Pause said.

“I hope you guys just got a glimpse of how it felt to be back years of, people saying whether I’m going to heaven or hell,” said Janel Diaz, a member of the Mayor’s LGBTQ+ Advisory Council, herself a trans woman of color.

“Your appearance at that event, and your public alignment with some of those statements that this organization puts out there, raises the question for me of, when one of your officers shows up at our homes, do they or you bring some sort of pre-determined bias,” said Andy Janecek, a member of the Mayor’s LGBTQ+ advisory board. “That’s the concern.”

“Do you personally believe that being gay or being trans is a sin?” asked Taylor Biro, another member of the Mayor’s LGBTQ+ advisory board.

Revell responded, “I’m not going to talk about beliefs here.” However, Revell repeatedly invoked his beliefs throughout the nearly two-hour-long community meeting. Biro’s comments pointed this out, to which Revell demurred and repeatedly called up members of the audience to speak on his behalf.

Revell made no effort to acknowledge the homophobic history of the Billy Graham Evangelistic Association nor distance himself from the organization. Echoing comments he made at the last City Commission meeting, he represented that the BGEA is not a homophobic organization. “We just fundamentally disagree. When I am off duty, am I still the police chief?” Revell said at the October 27th meeting.

Since OurTallahassee’s original report on September 30th, 2021, we’ve released the audio recording of his speech and released two letters that Revell mentioned: one from the Congressional Prayer Caucus Foundation, a right-wing fundamentalist group, and one from the Freedom From Religion Foundation. We’ve released photos from his appearance at the conference, one of which shows him in a Class-D Uniform (page 2, TPD Uniform Policy), which shows that Revell was in fact wearing a Tallahassee Police Department uniform on at least one day at the paid conference. Other media outlets have pointed out the hypocrisy of Revell’s defense, considering he himself punished an Officer for an off-duty racist remark. Revell said in the media back in August 2020 “As Chief of Police, I called for this investigation because I hold every representative of TPD to the highest standard, whether on duty or off.”

Franklin Graham, too has weighed in on the controversy over Revell, issuing a lengthy statement, which said in part, “I admire and am grateful to Police Chief Lawrence Revell,”… “It is a shame that certain groups are calling for his demotion or removal because he participated in this event and expressed his faith,”

“Some groups have accused BGEA and me of being anti-LGBTQ. This is absolutely not true.” Graham’s statement went on to say “anyone who repents can be forgiven and made right with God.” Graham’s claims since issuing that statement have been widely challenged in the LGBTQ and political media.

Graham followed up his statement with a series of tweets.

The Florida House Speaker Chris Sprowls also weighed in, stating “This attack on Chief Revell reflects the Un-American idea that there is only one acceptable opinion, only one permissible belief.”

While the room was packed with supporters of Revell, the supporters of LGBTQ+ equality and the majority of the Mayor’s Council found Revell’s appearance disappointing.

In closing remarks, Jon Harris Mauer, a member of the Mayor’s council, addressed Revell, stating: “I do think your appearance has broken a lot of trust and credibility, and what we’ve heard tonight has not restored that for me personally as one member of the community.”