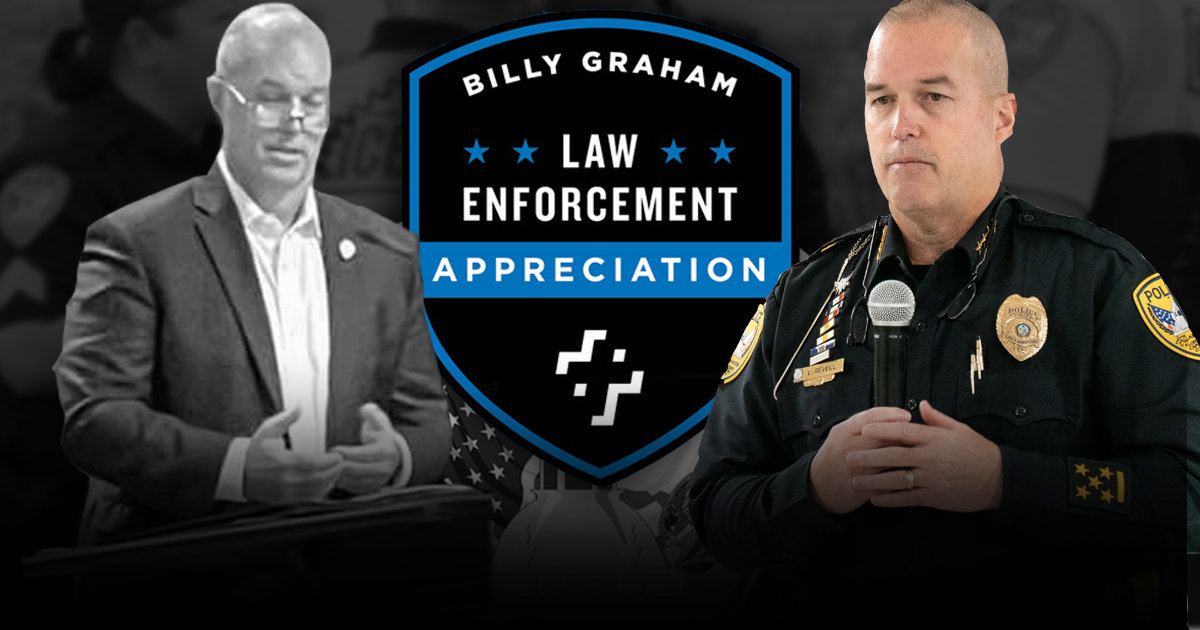 BGEA hosted the three-day long Chief Law Enforcement Officer Appreciation Event retreat from September 28-30th at the opulent Billy Graham Training Center at the Cove. Our Tallahassee Police Department Chief not only attended the event, but even spoke at it as well.

“While I wasn’t the City’s first choice, I was God’s first choice,” Revell says in the recording, discussing his highly controversial appointment as Tallahassee’s Police Chief.

Revell discusses how it should be the “number one priority” for police chiefs to spread Christianity in the ranks of their police departments. “What is your agenda to share the gospel of Jesus Christ to your officers?”

Revell encourages other chiefs to push back on their City Managers and City Commissioners if criticized for working in religion into the management of their departments “Hold the line,” he says, comparing his role to Peter and Paul from the Bible.

“Don’t move the line because of opposition you might face,” beginning to discuss his criticisms by County Commissioner Bill Proctor about Revell’s 1996 killing of Nuke Williams.

Revell at times seems mocking of the separation of church and state, discussing how he received a letter from the ACLU after he was sworn in, and discusses another letter in support from a Washington DC organization that cheered him on and promised to defend him legally.

OurTallahassee began looking into this issue after a concerned member of the community reported that they overheard Revell discussing his weekend plans at the September 27th, 2021 Blueprint meeting, which our source described as “I overheard TPD chief Lawrence Revell yesterday talking about speaking at a Billy Graham Center event for executive law enforcement.”

After extensive research, OurTallahassee linked through LinkedIn searches the employees of the BGEA, one of which is Allen Scroggs, who lists his position as the Director of Law Enforcement Events. We began tracking the social media activity of all prominent BGEA employees to look for signs of Revell. On Thursday, we were able to confirm Revell’s speaking engagement at the all-expenses-paid retreat from a Facebook post made on Scrogg’s personal Facebook page on Thursday, September 30th, 2021, which is included below. 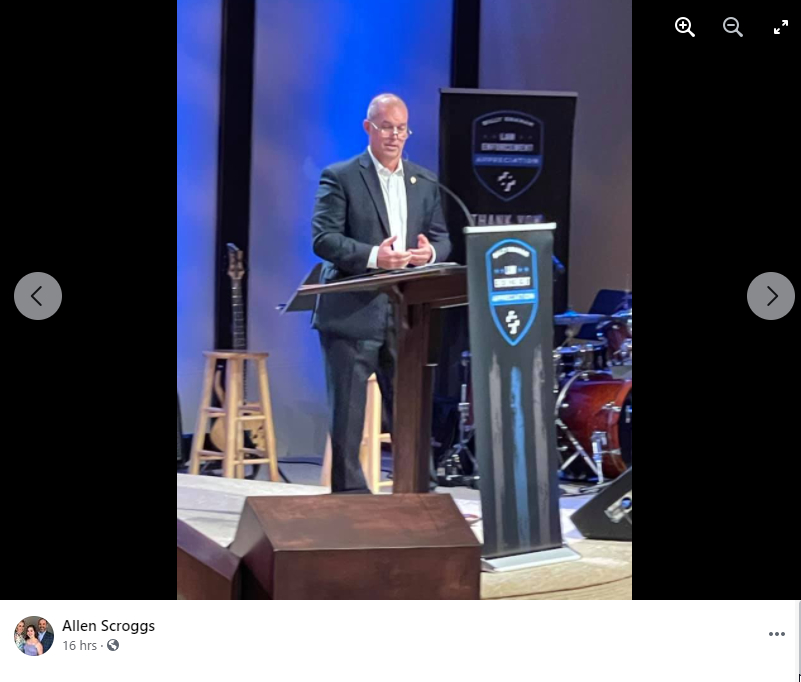 THE BILLY GRAHAM TRAINING CENTER AT THE COVE

The BGEA boasts about their Blue Ridge Mountain retreat, the Billy Graham Training Center at The Cove on their website about the opportunity for spiritual renewal and relaxation. The famous 2,500-acre private resort hosts BGEA events and training retreats throughout the year.

In a video posted to our YouTube channel, the BGEA showcases the amenities at the Cove below.

Billy Graham, his son, Franklin Graham, and the large non-profit organization have a long history of anti-LGBTQ+ stances.

On the current BillyGraham.org website, under the FAQ section, there’s a question entitled “I have a loved one who is gay, where can I find help?“. In response, the non-profit suggests:

“We want to assure you that any willing person can be liberated from homosexuality through the power of Jesus Christ; see 1 Corinthians 6:9-11, especially verse 11. If your loved one is not yet willing to seek freedom from homosexuality or seems unable to find it, then you should pray earnestly for his or her release.”

Revell spoke at the event, a subsidiary of the BGEA, the Billy Graham Rapid Response Team (RRT) on Thursday, September 30th, 2021.

According to RRT’s mission statement, they state “The Billy Graham Rapid Response Team strives to give officers the opportunity to build their spiritual fitness and encourage Christ-centered growth in their careers, marriages and lives.”

The BGEA RRT hosts an annual Chief Law Enforcement Appreciation Events, which recently wrapped up from September 28-30th. A copy of a promotional flyer for the same event in 2020 list the event cost $295 for an individual, and $495 for a married couple. However, the 2021 event page states, “There is no charge for chiefs, sheriffs, and their spouses.”

If there is any doubt that the BGEA’s homophobic stances do not extend to their RRT program, a job posting for Law Enforcement Manager for their Rapid Response Team states:

“We believe God’s plan for human sexuality is to be expressed only within the context of marriage, that God created man and woman as unique biological per complete each other. God instituted monogamous marriage between male and female as the foundation of the family and the basic structure of human society. For this reason, we believe that marriage is exclusively the union of one genetic male and one genetic female.”

It is worth noting that police chiefs and those in leadership in law enforcement realize that their public position and duties are closely linked to their personal lives. In May 2021, the interim Seattle Police Chief Adrian Diaz rejected Graham’s invite to their appreciation dinner, stating in a department email that “based on Graham’s history and affiliations, the email has raised concerns that the SPD may not be committed to the equity of our community’s LGBTQ members … I want to make clear the Department fully supports the equity and just treatment of all people.”

Revell was appointed Police Chief by City Executive Reese Goad in a controversial move in a botched police chief search over the 2019 holidays, after previously rejecting the popular Antonio Gilliam in a highly public feud with the City Manager. That led to the appointment of Revell, and Gilliam releasing a letter to the public denouncing the botched search under Goad.

Tallahassee Mayor John Dailey has been a strong supporter of Revell. Dailey helped run interference on community pushback against Revell’s appointment to the role in early 2020, and worked privately behind the scenes to elevate Revell into the role when discussions with Gilliam began to unravel.

David Bellamy, a former police officer has filed for City Commission Seat 3 against Jeremy Matlow. Bellamy, a close ally of Dailey, has also been a long-time supporter of Revell, who supported Revell throughout the controversies of the police chief search. Bellamy is widely rumored to have been recruited by Dailey, Prosecutor Jack Campbell, and Greater Tallahassee Chamber of Commerce incoming Chairman Sammie Dixon. 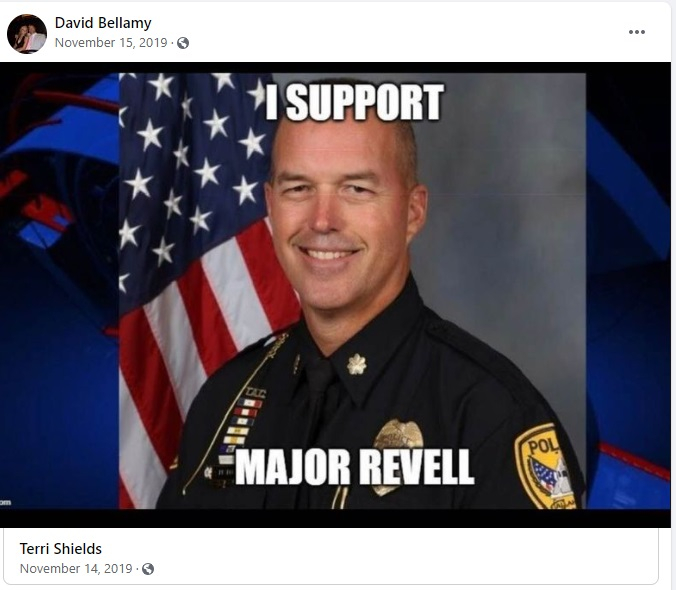 LISTEN TO THE FULL AUDIO OF REVELL'S SPEECH

OurTallahassee began looking into this issue after a concerned member of the community reported that they overheard Revell discussing his weekend plans at the September 27th, 2021 Blueprint meeting, which our source described as “I overheard TPD chief Lawrence Revell yesterday talking about speaking at a Billy Graham Center event for executive law enforcement.”

We rely on sources, sometimes anonymous, for our reporting. We can’t do it without you. We  encourage you to view our method of sourcing our reporting on our about page so that you can help us bring important issues about our community to light while protecting your identity.