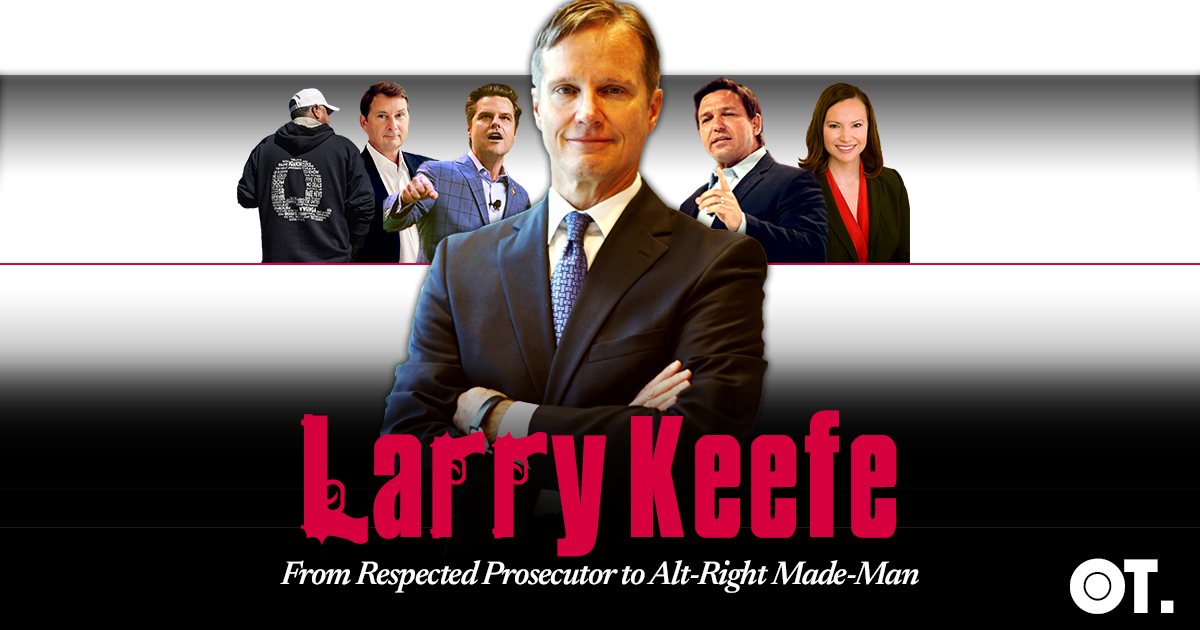 If you’ve spent any significant time in several Northeast cities (New York, Boston, Providence, Hartford) – particularly in the Italian neighborhoods – you’ve probably heard the term “mobbed up.” It simply means you’re either a made member of the Mafia or you do some amount of business with them.

It could be as simple as a cop tipping them off or a legitimate business owner who wants to make that one score, and he’ll never deal with them again.

The fact is, once you’re mobbed up, you never get away from it.

Of course, if you have watched the Godfather movies or any appreciable number of episodes of the Sopranos, you understand the meaning of “mobbed up.”

So while reading the following metaphorical uses of the mob to describe associations with Donald Trump and his organization, please remember, it was Trump who originated these comparisons.

In late September, former US Attorney for the Northern District of Florida Larry Keefe traveled to Fort Myers to, once and for all, take the loyalty oath to Donald Trump World. Loyal Trump Lieutenant (Gov.) Ron DeSantis, along with the ever-trusted capo (Attorney General) Ashley Moody, conducted the ceremony.

Disregarding the Mafia metaphor for a moment, Keefe was being inducted into DeSantis’s administration as the “Public Safety Czar.” The brand-new position would carry out a new executive order banning state agencies from “facilitating illegal immigration into Florida.” They also announced that Florida would be suing the Biden administration for failing to carry out immigration policies.

In reality, this was the latest bit of political performance art by DeSantis and Moody to take the latest hot button issue from Fox News, blow it up into a phony crisis and, as could have been predicted, send out frantic fundraising emails within hours of the press conference.

Looking back, Keefe was like many who slowly are sucked into life in an organized crime family and thought he could have it both ways. He thought he could cavort with liberals; write campaign checks to numerous Democrats including Hillary Clinton, Bill Nelson, and Alex Sink; and still climb the ladder that is Trump World.

He was quickly disabused of that notion when his 2016 US Attorney nomination for the Northern District of Florida was interminably held up in the Senate until top Trump lieutenants Rep. Matt Gaetz, Sen. Marco Rubio and lobbyist Brian Ballard were able to push it through.

So, while Keefe technically was in, he still had to prove himself; many in the GOP still thought Keefe was insufficiently loyal. In the real mob, you have to kill someone; in the Trump organization, you simply have to strongly support the Big Lie: The bullshit that Trump actually won the 2020 election, or the pre-election nonsense that if Trump lost, the election was stolen.

Like many hotheaded, aggressive young mobsters, Keefe let his enthusiasm get the better of him and had to be slapped down by one of The Donald’s top Dons — US Attorney General Bill Barr.

As Joe Biden buttoned up the Democratic nomination and President Donald Trump furiously worked to cast doubt on an election not yet held, Keefe told Rep. Matt Gaetz of plans to open a wide-ranging investigation of voter fraud in Florida. He believed that US attorneys whose districts lie within state capitals could launch such investigations. The problem was he was being blocked by the Public Integrity Section at the Justice Department, according to a blockbuster report in Politico.

Being a top Trump fanboy, Gaetz told the president of Keefe’s cockamamie legal theory, and Trump leaned on the Attorney General to act on it. In Trump’s mind, this was brilliant thinking.

Barr was not happy, according to sources, and fumed to Keefe, “If I ever hear of you talking to Gaetz or any other congressman again about business before the department, I am going to fucking fire your ass.”

Probably not what Keefe wanted to hear. However, his loyalty to Trump World was now beyond questioning.

So, Keefe faced a crossroad: He could continue down the path that had gotten him bipartisan respect and praise that nowadays is as rare as hen’s teeth.

Or he could take a hard right and engage in performance politics for DeSantis for $125,000 a year, have a fat travel budget to raise his profile across Florida for any potential run for office, all with the knowledge DeSantis is a heavy favorite for re-election.

Looking further, DeSantis and Trump are both heavy favorites for the 2024 Republican presidential nomination, so in just a few years, he could be back in the big time if the dominoes fall right.

Of course, he would also be carrying DeSantis’s dirty water on the ugly issue of immigration. That rare bipartisan respect and praise will likely be out the window after Keefe has to convey the racist, false, and needlessly alarming messages that DeSantis’s press team hands him.

He will have as much latitude as former Florida Surgeon General Scott Rivkees did when he deviated from his talking points at an April 2020 pandemic press conference. Rivkees deviated from message and was literally pulled away from the podium by a press secretary and was never heard from again until his ignominious departure a little over a year later.

When Keefe was not retained as US attorney, he spoke of wanting to work in the black community and has written on social justice reform.

How is that going to look when he has to talk tough with the press while black and/or brown people are perp-walked in front of cameras to satiate the MAGA crowd that still think that “Mexico is going to pay for the wall?”

Does Keefe really want to defend the immigration lie?

DeSantis and the legislature, with much fanfare, passed a bill (SB 664) requiring state and local governments and contractors to require the use of the federal E-Verify system for all hires. But in the first five months, the law was in effect, there was not a single complaint made, nor were there any enforcement actions.

If DeSantis and his cohorts truly wanted to put a dent in the number of undocumented workers in Florida rather than use it the issue for political performance art, it should be easy. Pew Research estimates there are 775,000 of these workers in Florida. The proof is in SB 664, which exempts the entire agriculture industry and private businesses without state government contracts.

That pretty much exempts the vast majority of business in Florida which does make one ask the question, “Why bother?” Further, if such a tiny percentage of Florida commerce could be affected, do we really need an Immigration Czar?

Unlike California, Florida refuses to admit that if they could wave a wand and truly eliminate these workers, the state’s economy, and its vital agricultural sector, would collapse.

As the American Farm Bureau admits on its website, 50 to 70% of farm laborers in the United States are unauthorized.

Orlando Sentinel columnist Scott Maxwell eloquently wrote recently, “It’s the dirty little secret of America’s economy. It runs on the backs of people who pick tomatoes for 2 pennies a pound and who then get berated by the consumers who stuff their faces with the cheap fruits of their labor.”

Big Sugar doesn’t write millions of dollars in campaign contributions to Republicans and hire legions of high-priced lobbying talent because they have nothing better to do with it—the same thing for Big Agriculture, Big Supermarket, and others.

Rick Scott campaigned for governor, claiming he was going to crack down with E-Verify. Subsequently, the industry showered him with hundreds of thousands of dollars, and Scott then went eight years without filing legislation or signing an executive order. Complete performative BS.

This is the world of sleazy lies, abuse of humanity, and political prostitution that Keefe is stepping into.

As Will Rogers famously said, “It takes a lifetime to build a good reputation, but you can lose it in a minute.”

Unlike the Mob/mafia metaphors above, Keefe could still step back “after much reflection” and refuse the appointment without fearing a contract would be put out on his life.

But the time to do that is quickly ticking away.