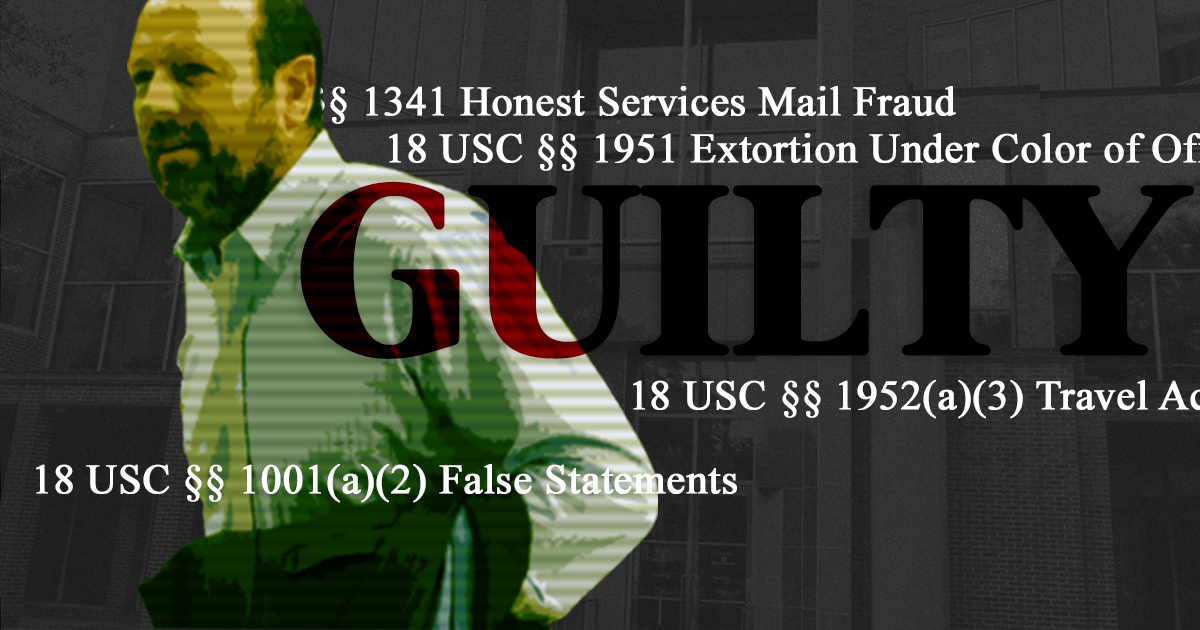 Burnette was found guilty in controversial trial six years in the making. Burnette guilty on five out of nine counts including honest services fraud and extortion.

A trial that had lasted for years, and delayed multiple times due to COVID-related issues, came to an end with jurors finding J.T. Burnette guilty of the majority of the charges, vindicating the FBI’s investigation.

“Justice is served. A crime had been committed and the citizens of Tallahassee are the victims. Now let’s make sure it never happens again. No more business as usual for city government,” said Ben Wilcox of Integrity Florida.

Extortion under color of official right, Burnette attempted to obtain and did obtain property not due Maddox or his office as a City Commissioner from Southern Pines.
Charges 5 & 6: Honest Services Mail Fraud GUILTY

“Burnette together with Maddox and Carter-Smith did knowingly and willfully devise and intend to devise a scheme to defraud and deprive the City of Tallahassee and its citizens of their right to the honest services of Maddox, a Tallahassee City Commissioner, through bribery.”

The offense occurred October 24th, 2016, for a phone call between Burnette and Southern Pines developer: “Burnette confirmed that the payments should be made to Governance and that such payments were ‘definitely for Maddox… there’s nobody else in Governance other than Paige, which is Maddox effectively'”.
Charge 9: False Statements to the FBI GUILTY
Burnette was found guilty of making false statements during a May 24th, 2017, visit by FBI agents to his home. Those false statements include that:

Burnette made “materially false, fictitious and fraudulent statements” within the executive branch of the Government of the United States, said the indictment which led to the successful prosecution.

Meanwhile, on Amelia Island, the same Chamber of Commerce conference mixer where FBI agents first started their investigation 6 years ago to the day, begins.

When asked last week whether he was going to the Annual Greater Tallahassee Chamber of Commerce Conference, which has generated a fair amount of controversy recently, Mayor John Dailey responded  “Yes. You will see me in Amelia Island.”

STATEMENT FROM THE FBI/US ATTORNEY
"those in public office will act in the public’s interest, rather than their own and that of their confederates"

Friday afternoon, the FBI and US Attorneys office issued a joint statement:

“Today’s verdict affirms a multi-year investigation of public corruption in the City of Tallahassee,” stated Acting U.S. Attorney Jason Coody.  “Our citizens deserve and expect that those in public office will act in the public’s interest, rather than their own and that of their confederates. Those who violate their oath and betray the public’s trust will be the subject of this office and our law enforcement partners’ unwavering efforts, which will continue beyond this verdict.”

“Let there be no doubt – bribes are not good business in Tallahassee, nor anywhere else. The FBI remains fully committed to ensuring that anyone who violates the public’s trust is held accountable,” Rojas said.

COMMISSIONER MATLOW
'everyday people will have justice, and today is just the beginning.'

Today’s verdict confirms what we’ve known for some time: bribery, corruption and extortion were committed from the highest levels of City Hall against the people of Tallahassee.”

“Today’s verdict confirms what we’ve known for some time: bribery, corruption and extortion were committed from the highest levels of City Hall against the people of Tallahassee.
There are serious problems at the core of how business is done in our local government. This trial has shined a light on a corrupt culture of fear enabled by a system insistent on abusing the public trust for personal gain.
The ethical lapses within City government and Blueprint are significant.
Make no mistake — we have a long road ahead of us to restore the public’s faith in our local institutions: we must directly address any contracts, hires, and policy decisions in Tallahassee or Leon County local offices that are tainted by the influence of what was confirmed in court today.
Let this be a clear message to the electeds, political consultants, donors and staff that enabled this behavior: everyday people will have justice, and today is just the beginning.
The federal jury has done their job, and now it’s time for us to do ours.
Beware of those who want to move on beyond the massive ramifications of this trial and sweep what we have discovered in new revelations under the rug.
People across our community are speaking out to say that enough is enough and it can’t be business as usual any longer.
It won’t be easy, but if we have the courage and we all work together, we can arrive at a truly just and fair City that works for everyone. of public corruption in the City of Tallahassee,” Matlow’s statement read.

“We will never know the full extent of the corruption or the toll it has taken on our community.
How many good projects were denied funding? How many qualified employees were denied promotions? How many essential public priorities were ignored? How many businesses were turned away because they could not or would not compete in a corrupt system?

All because of the greed of a small group of individuals and a well-connected elite who turned a blind eye.
We all suffer from their actions. They took our tax dollars and abused our trust.
Do not listen when people say we have done all we can do. We are only just beginning to rebuild the public’s trust, make things right, and see justice truly served.
This is why I ran for office.
There is power in our voices, and we must use them to ensure that this never happens again. That won’t happen through empty promises, but through meaningful policy changes to our ethics policies, campaign finance reform, and much more. That’s what I was elected to do.
We’re not going to let this moment pass without reflecting on where we have gone so wrong. We’re going to build a more just City that works for everyone.”

MAYOR JOHN DAILEY
'as we move forward, we must all rededicate ourselves to the hard work of healing our community'

I am disappointed and angered by how the public trust was violated for personal gain and this should anger every single citizen of Tallahassee. Our entire community bears deep and lasting scars because of the self-serving acts of a few. I ran for Mayor to do my part to restore that public trust, and I’m proud that within my first year we passed the most comprehensive ethics reform package in our city’s history and the strongest in the state. Now, as we move forward, we must all rededicate ourselves to the hard work of healing our community.