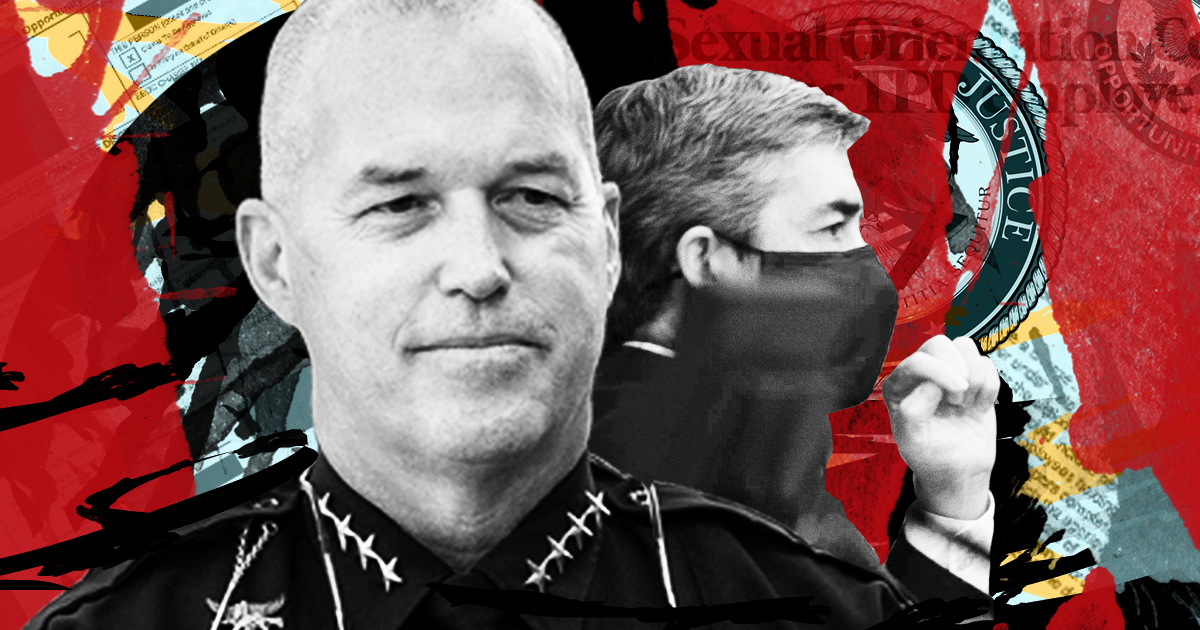 Federal prosecutors in the U.S. Department of Justice Civil Rights Division are conducting a probe of Police Chief Lawrence Revell and two other high-ranking officers, following claims of discrimination, a source says. The DOJ conducts probes to determine whether to pursue further legal action. The probe is a result of an EEOC complaint made more than a year ago.

The complaints originated from a former employee of the Tallahassee Police Department for workplace discrimination, based in part on sexual orientation. Alleged retaliation from the complaint led to the employee leaving the Department in July of 2021.

“She is the victim of retaliation for reporting discrimination about her age, gender, and primarily about the mistreatment because of her sexual orientation,” Mattox said in an interview with Our Tallahassee.

“After her first complaint, things were relentless for her,” Mattox said, describing the treatment of her client over the past two years. “She had already reported being treated differently, from promotions, payscale, and unequal workload.”

In 2020, the U.S. Equal Employment Opportunity Commission (EEOC) received a series of complaints from a TPD employee detailing claims of discrimination by Tallahassee Police Chief Revell. The employee was a 20-year veteran of the police department and a member of the LGBTQIA+ community. She alleges that Revell retaliated against her in part due to her sexual orientation, which led to her constructive discharge this past summer. The employee also alleges that Revell created a hostile or intolerable work environment and applied other forms of pressure or coercion that forced her to leave employment.

For the past year, the EEOC has been investigating the worker’s claim and recently found reasonable cause to pursue the complaints. In late October, the case was referred from the EEOC to the Justice Department. The cross-agency collaboration indicates that the Justice Department may have an interest in pursuing the discrimination case in federal court, sources close to the probe say.

This revelation, published by OurTallahassee here for the first time, challenges a narrative pushed by Tallahassee Police Chief Revell, City Executive Reese Goad, and Tallahassee Mayor John Dailey that there was nothing wrong with the Chief’s October 2021 all-expenses-paid retreat and paid speaking engagement at the Billy Graham Evangelistic Association (a story broken by Our Tallahassee).

Dailey, for example, dismissed the public outcry against Revell’s conference appearance, which included saying he “was chosen by God” and that his top priority is spreading Christianity in the police department, as “hurt feelings” at the October 13th City Commission meeting. The Billy Graham Evangelistic Association has a history of proactively pursuing an anti-gay agenda, including conversion therapy; Seattle’s police chief declined to speak at a similar event hosted by BGEA for that reason.

In the weeks that followed our reporting on Revell, including an audio recording obtained of his Billy Graham conference speech, Revell and City executives have remained staunch in their unquestioning defense of Revell’s appearance. Yet during the same period, federal investigators have been exploring taking action against the Tallahassee Police Department and the City of Tallahassee on behalf of the former worker, which threatens to bring vast investigative resources and scrutiny down upon TPD and the city’s human resources practices. 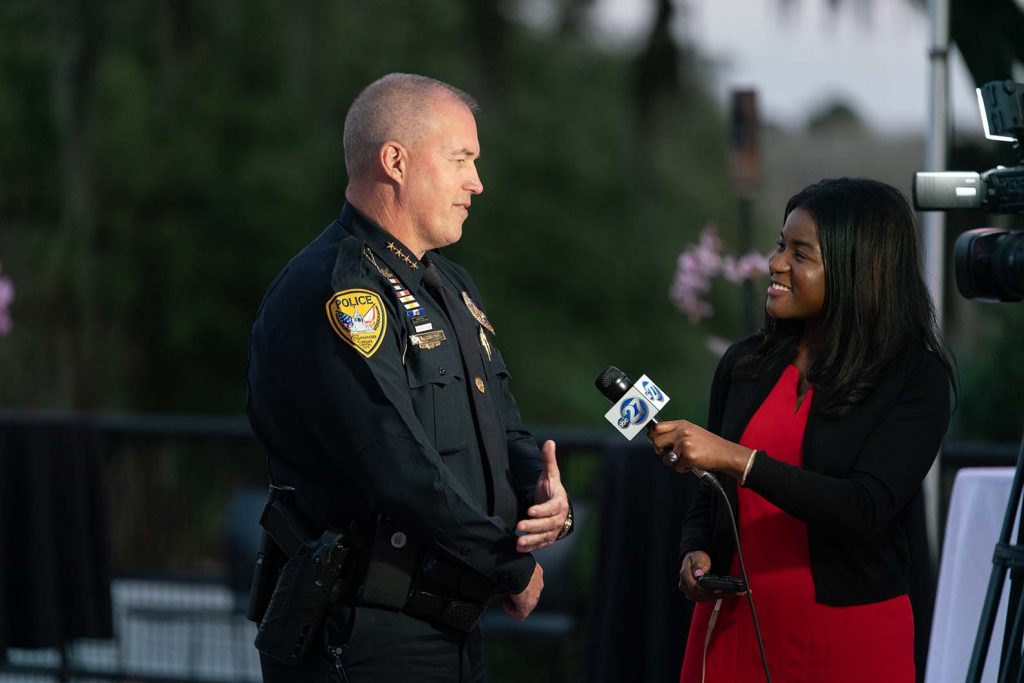 The unearthed complaint flies in the face of several of Revell’s previous public comments on his treatment of LGBTQ+ members of the Department.

At the October 27th City Commission meeting, Steve Uhlfelder, a prominent attorney and human rights activist in town, spoke out against Revell’s appearance at the event, which prompted City Manager Reese Goad to address the issue.

“What I think is most important is for Chief Revell to talk about how he serves our community every day.  His approach to serving our community, his track record, and leadership to support diversity and inclusion,” Goad said.

It was Goad who was responsible for the unusual process by which the City’s overwhelming consensus first choice for chief very publicly declined the job, with Goad, not God, then putting forward Revell for the position.

Goad called Revell to the podium at the October 27th meeting to address the issue, with Revell saying, “The real issue is as police chief how do I treat every citizen in this county, and how do I treat the members of my department and, I will proudly stand on my record.” He was likely unaware that the Justice Department had begun a probe into his conduct just days before that would seriously question these assertions.

“How I treat members of my police department will never ever include any kind of discrimination, and I think if you want to know whether that’s true or not then go ask the men and women of my department, go ask them specifically,” Revell said.

“We will have challenges, and we will have hurdles, feelings will get hurt, and we will need to have discussions,” said Tallahassee Mayor Dailey at the October 13th City Commission meeting, in an apparent attempt to minimize the issue.

The Justice Department probe comes as the highest-ranking, openly LGBTQIA+ City of Tallahassee employee, Assistant City Manager Raoul Lavin, gave notice on October 29th of his resignation. This resignation occurred in the wake of the revelations that Revell had spoken at the Billy Graham event and City Hall sources close to the decision say that Lavin issued his resignation in response to City Manager Goad’s handling of the situation. An LGBTQIA+ worker at the City who was privy to the internal deliberations in the city manager’s office described Goad’s handling of the situation as “brushing it under the rug.”

While the federal probe addresses the individual employee’s discrimination claim, the Biden/Harris justice department has pursued an aggressive agenda of fighting for LGBTQ+ worker’s rights in general.

“This is a misunderstood population by employers and by themselves about what their rights are. I would hope that a lot of people get involved investigating these types of cases because they are tragic,” Mattox said when asked about the Justice Department’s involvement in the case.

In a previous news release regarding the EEOC and DOJ’s overall prosecution efforts, Assistant Attorney General Eric Dreiband said, “All Americans are entitled to work with dignity in a place that is free of unlawful and discriminatory harassment.”

Mattox’s client may soon get her day in court. “We are right around the corner from filing a lawsuit.”

OurTallahassee.com has reviewed documents that confirm the probe. To protect our source, we have opted not to release those documents. OurTallahassee.com spoke with multiple legal experts specializing in federal discrimination complaints and also with experienced federal workers’ rights litigators to substantiate our story.

If you or someone you know would like help to get their story out about workplace conditions, please email us at admin@ourtallahassee.com.

Our about us page outlines our advice for ensuring your anonymity while communicating with us.