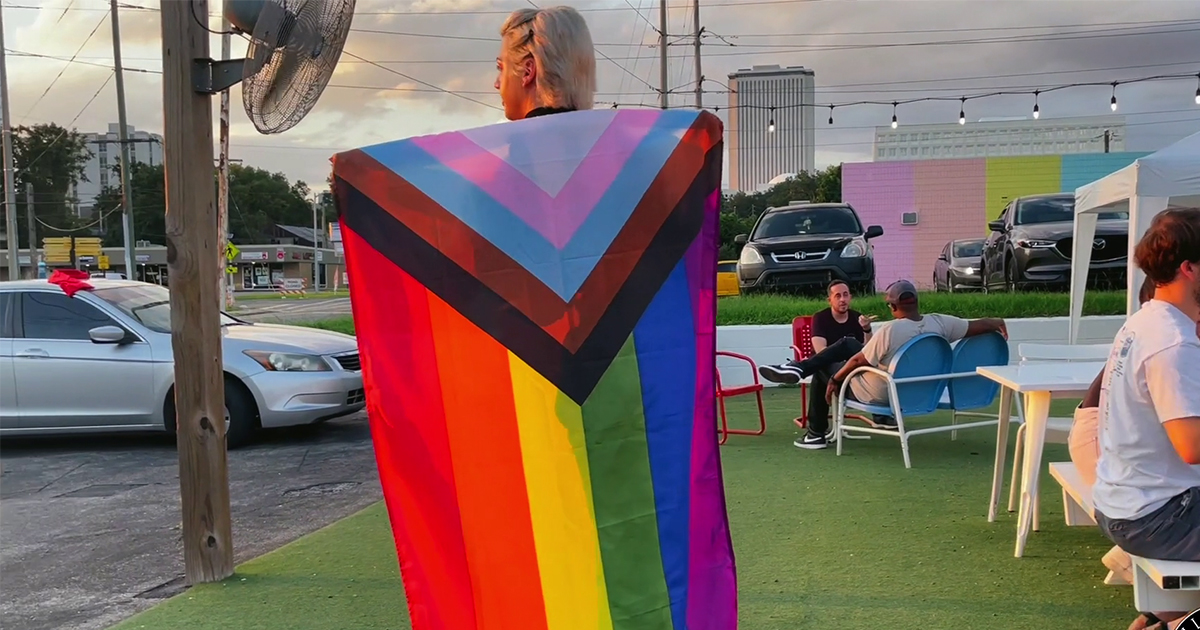 Pierre breaks down how Mayor John Dailey took credit for the work of LGTBQ+ groups and bailed on them when they needed help the most.

Both pictures used by the Tallahassee Democrat in their article “Tallahassee receives a 100 score for LGBTQ+ inclusiveness in 2021 Human Rights Campaign report” were taken from a protest held by the Tallahassee Community Action Committee. One of the pictures is of Drag Queen Sassy Black, an incredible performer and member of the queer community in Tallahassee.
Behind her is a sign that says: “CPAC now!” This is a demand for community control of the police, which seeks to create a civilian police accountability council, which would have the power to discipline police officers for misconduct and brutality.
But the article written doesn’t tell you anything about this. It doesn’t quote her. It doesn’t heed or give any credit to the activists they are using the picture of. In fact, the only person receiving credit in this article is Mayor John Dailey.
Yes, Mayor John Dailey is, a supposed hero to the LGBTQ+ community. The same mayor who made it possible for five police organizations to gang up and arrest 18 protesters for fighting for CPAC and accountability in the cases of Tony Mcdade, Mychael Johnson and Wilbon Woodard.
The same mayor refused to hear a debate about CPAC despite the thousands of emails sent to the Tallahassee City Commission. The same mayor who loves the image and appearance of supporting the LGBTQ+ community in Tallahassee, but who sits in silence when actual activists and members of the LGBTQ+ community are being attacked by police violence and harassment.
When it comes to real action taken to protect and defend the queer and trans community, Dailey is nowhere to be seen. Unless, of course, there is a photoshoot involved. This is exceedingly dangerous because it obscures the actual organizers and activists struggling for progressive policies and actions, making it more difficult to recruit people to our work.
Instead, Dailey and the city commission get credit, making it seem like change in our city happens because of their personal kindness and generosity. This is especially evident in the creation of a conversion therapy ban in Tallahassee.

This was a policy created and drafted by Kathryn Lane and Lakey Love- two activists in Tallahassee. Members of the Tallahassee Community Action Committee (TCAC) worked with organizers such as Darwin Gamble and Barry Munroe, Florida State Universities Gender Odyssey and Pride Student Union, the Tallahassee Students for a Democratic Society, and the aforementioned Lakey Love – the leader of the Florida Coalition for Transgender Liberation (FC4TL) and a member of TCAC – as well as myself, Regina Joseph, and many others.
We proposed the legislation, created the policy language, and presented it to the city and its commissioners. We thought it would take about three months to get the legislation passed, given the fact that city commissioners seemed receptive to the policy at first. It took over six months due to the city attorney constantly altering the language to be more exclusive to transgender and gender non-conforming individuals.
Yet again, in the article written by Karl Etters of the Tallahassee Democrat: “Tallahassee passes conversion therapy ban,” no credit was given to TCAC or any of the organizations involved in fighting for this ban. The names of Lakey Love and Kathryn Lane – who drafted the language for this entire bill – were not even mentioned.
We’re starting to see a pattern here.

John Dailey and establishment media are totally willing to silence and ignore the actions of activists working to implement change in our city.
Unfortunately, this isn’t the worst instance of John Dailey’s superficial support for the LGBTQ+ community. The worst instance in recent memory is Dailey’s refusal to call out or hold Police Chief Lawrence Revell responsible for attending the Billy Graham Evangelistic Association (BGEA).
We can’t only blame Revell for his attendance at this event. City leadership is totally responsible for allowing this breach of ethics and common decency to be allowed in our city. Revell’s attendance at a conference led by an organization that funds and supports anti-LGBTQ+ policy around the world was confirmed by Deputy City Manager Cynthia Barber.
I wonder if the Municipal Equality Index would still give Tallahassee a score of “100” if they knew our city allowed our police chief to go on a paid excursion to an organization that believes such things as (and this is a direct quote): “God is the One who is able to transform lives and heal the scars of painful memories. We want to assure you that any willing person can be liberated from homosexuality through the power of Jesus Christ.”
Revell and the city commission claim that his faith has nothing to do with any anti-LGBTQ+ sentiment – his affiliation with the BGEA was totally personal and faith based. It’s hard to not be skeptical of these claims, however, given the fact that Revell refused to say whether or not he thought being gay was a sin, and is supporting an organization that has donated $96 million into influencing anti-gay legislation worldwide.

Did Dailey admonish Revell for his actions? Did he propose an investigation? Did he do anything to hold him accountable? No, he didn’t. The only ones to speak up against this unethical behavior were City Commissioners Jack Porter and Jeremy Matlow.

City Commissioners Curtis Richardson and Dianne Williams-Cox were also complicit in allowing Revell to get away with this breach in conduct. Williams-Cox even said, “We did not sell our souls and ourselves to these positions. We are public servants. And even public servants need time off. We do have lives outside of this.”
To add insult to injury, the city commission issued no formal apology or criticism even after the Department of Justice threatened to investigate Revell. Despite Revell’s claims of being an ally to the LGBTQ+ community and never discriminating against his own officers, proof surfaced that a former employee had alleged she was being discriminated against by Revell for her sexual orientation.
Once again, John Dailey said nothing. It seems that LGBTQ+ rights are something he only pretends to care about when it personally benefits him.
As a Black, transgender activist who has been struggling to make Tallahassee a safer place for queer and trans people since 2019, I think it is imperative we give credit to the organizations involved in struggling for progressive change in Tallahassee. Stop saying “LGBTQ+ activists” in articles and start saying “The Tallahassee Community Action Committee, The Florida Coalition for Transgender Liberation, Gender Odyssey, and Tallahassee Students for a Democratic Society.”
Stop giving Dailey and opportunistic city commissioners like Dianne Williams-Cox and Curtis Richardson credit for our accomplishments. Start uplifting commissioners who actually support and work with activists, such as Matlow and Porter.
And as for John Dailey, I think that when it comes to LGBTQ+ rights in Tallahassee, he should stick to his strategy whenever supporting them doesn’t benefit him personally.
Keeping his mouth shut and staying silent.