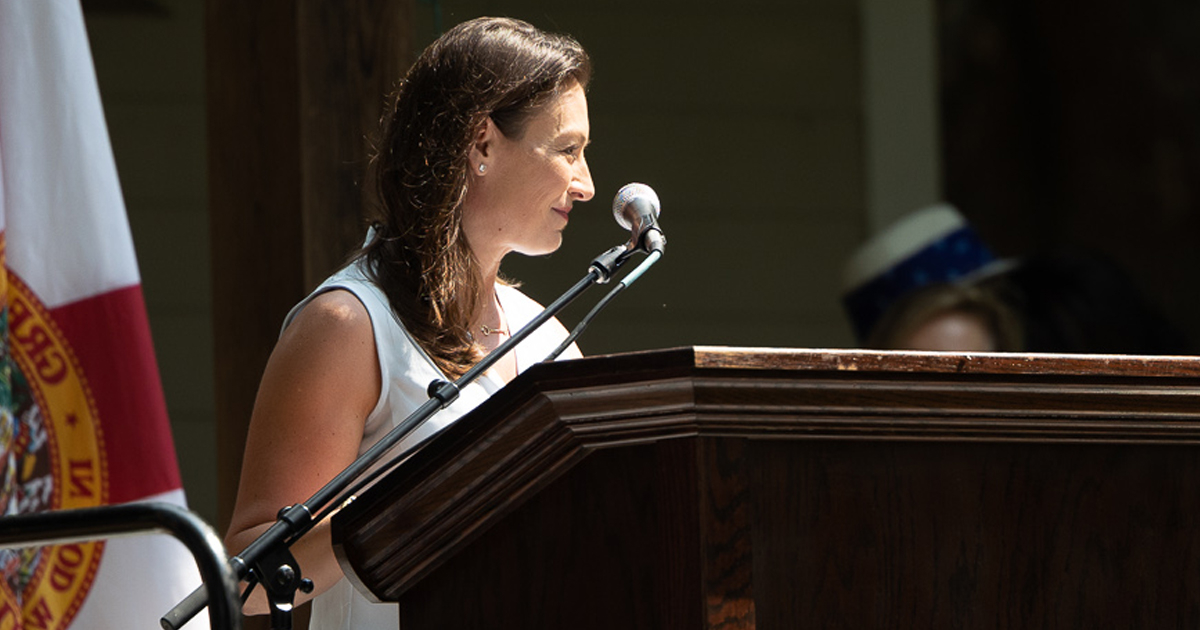 In Leon County the race for US Senate and Governor heats up at the Democratic Club of North Florida, at Bradleys Pond.

North Florida Democrats braved the late July heat last weekend to hold the Flip Florida Blue Breakfast at the Bradley’s Pond Retreat. The event was put on by the Democratic Club of North Florida.

Anyone who doubted that Democratic votes in the Big Bend region will be crucial in the 2022 primary only had to look at the A-list candidates who traveled to Leon County, and also braved the heat, to speak at the rally.

The rally started bright and early with a breakfast buffet featuring – what else – Bradley’s sausage. Fortunately, shade, ice and water were also plentiful during the event. The 500 tickets available for the rally were sold out.

Agriculture Commissioner Nikki Fried, the only current statewide elected Democrat since her historic win as the first woman elected to Commissioner of Agriculture and Consumer Services in 2018 is running for Governor of Florida. She spoke this Saturday at the Democratic Club of North Florida’s annual meeting to make her case to North Florida Democrats.

Fried just came off of an impressive fundraising haul. The Hill’s Julia Manchester reports that Fried raised $813K in her first month running for Florida governor. Fried’s campaign website can be viewed at NikkiFried.com.

Crist talked about his time as a Governor, pressuring his then-Attorney General to issue an emergency order to extend voting hours in the final hours of the 2008 General Election due to a heatwave.

Crist has a long career in politics, serving many elected roles, including Florida Attorney General, State Senator, Education Commissioner, Attorney General, and Governor. Crist was previously the Democratic nominee for Governor in 2014 and also ran in 2010 as an Independent in the race for US Senate against Marco Rubio and Kendrick Meek. Crist is expected to out-raise Ag Commissioner Nikki Fried, with his long track record as an effective fundraiser in statewide contests.

FloridaPolitics.com’s Peter Schorsch reported that Crist had raised $1.5 million in his first month’s campaign for Governor. Crist’s campaign website can be found at CharlieCrist.com.  St. Pete Polls issued yesterday that Crist leads DeSantis in a head-to-head 45% to DeSantis 44%, with 11% undecided.

U.S. Representative Val Demings (FL-10), who was also the former Sheriff of Orange County made an impassioned speech about why she’s running.

“You think I don’t care about what working people care about? I watched my father James Leroy Butler, and my mother Eloise Laura Butler, go to work every day to makes ends meet for our family. To keep a roof over our head, and food on our table” Demings said.

FloridaPolitics.com’s Scott Powers reported that Demings raised $4.6 million in her first quarter of 2021. Demings website can be found at ValDemings.com.

Commissioner Ken Russell spoke about the urgency of climate change action and described several programs he has enacted in the Miami City Commission as a member of the 2-3 minority on the Commission.

FloridaPolitics.com’s Anne Geggis reports that Russell raised $441k in his second-quarter fundraising in 2021. Russell’s campaign website can be found at KenRussellforFlorida.com.