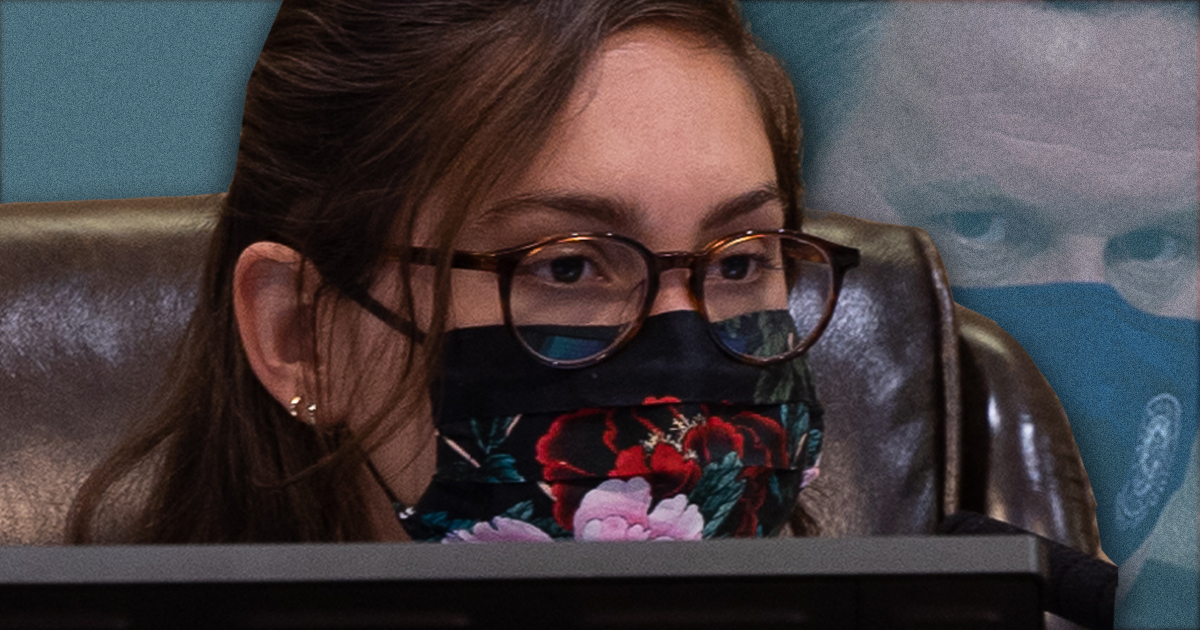 Jack Porter interviewed with Trimmel Gomes this morning on behalf of Sunrise Florida, a product of FloridaPolitics.com. Subscribe to Gomes’ Sunrise Florida by clicking here.

“I think that there has been a pattern during our meetings where we do not allow for open discussion and debate, and that is deeply troubling and disappointing.”

Porter hopes that “the Mayor considers that I was elected just like he was, by the same people who elected him. The people depend on our ability to speak on their behalf, and when you silence a Commissioner, you really silence a community.”

Porter on City Hall’s Bribery Ring:
“I think what we saw was a pay-to-play system” said Jack Porter to Gomes, on Monday.

“And of course you cannot make a person good or ethical with policies, but you can protect the cities integrity, you can protect the intergrities of our projects and of staff. and make sure that we make it more difficult for loopholes, and ways to get around acting on behalf of the publics best interest.”

“Ethics reforms protect all of us” said Porter. 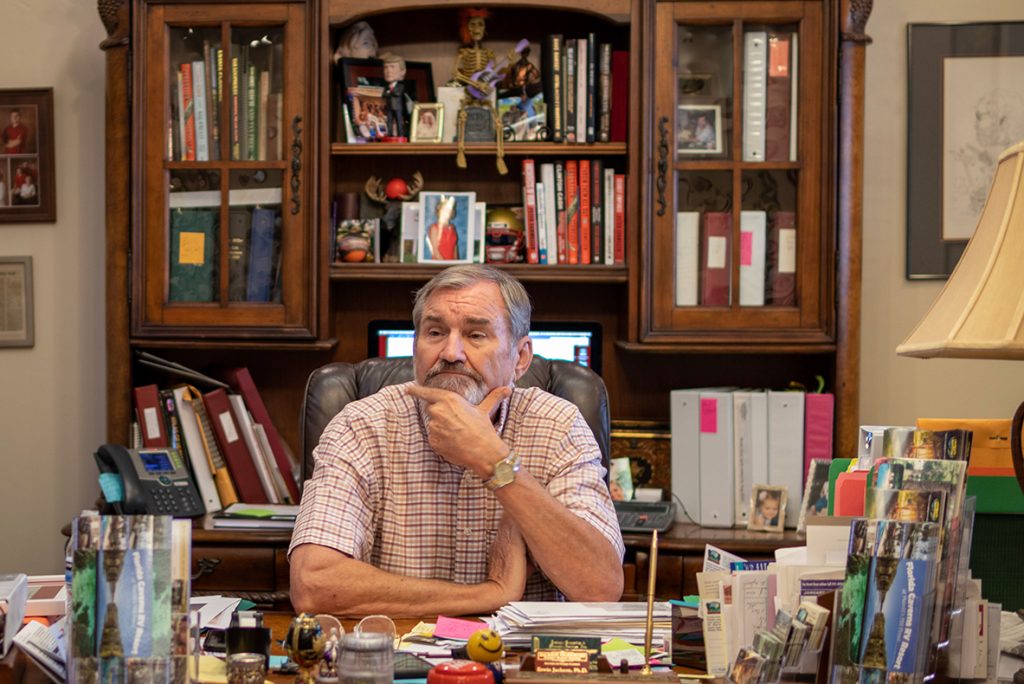 In response to the recent conviction of former Commissioner Scott Maddox, the public has called for sweeping new ethics reform. Following Jackson’s critiques, there was a discussion among Commissioners about potential ethics reform. City Commissioner Jack Porter attempted to start a dialogue with Commissioner Matlow numerous times regarding the reform, only to be ignored.

Dailey, who has openly opposed many of the proposed reforms, refused to allow Porter to weigh in. Dailey’s campaign manager, who lobbied for the same developer convicted in the recent federal public corruption trial, has been accused of using his relationship with the Mayor to secure lucrative city contracts. Dailey’s campaign manager continues to this day to work for JT Burnette.

Some Commissioners want this practice to end. “If I do anything in elected office, it’s going to be to fix the system and the City of Tallahassee,” Matlow said. The Mayor didn’t take that well.

“I’m very hesitant to have conversations and get into detail about campaign consultants’ impacts on public and private and business relationships,” Dailey said when the subject came up in open discussion.

Porter waited patiently for more than 16 minutes to speak on new ethics reform, but was consistently ignored by Dailey. Each commissioner had the opportunity to express their mind on the reform, but rather than let Porter speak, the Mayor interrupted her and frantically adjourned the meeting.

“With that it is 6:46,” the Mayor said as he began to gavel out the meeting. “Mr. Mayor, I had my hand up when Commissioner Matlow was speaking,” Porter said, asking to be recognized.
“Commissioner Porter, I’m going to adjourn the meeting. We’re done. Is this just a quick comment?” Dailey stated.
“I would really appreciate the opportunity to direct my question to Commissioner Matlow, I think, in the spirit of sharing ideas. I did not take my own time,” Porter said.
“Right,” Dailey responded.
“I would really appreciate the opportunity to ask my question,” Porter said. “OK, we stand adjourned,” Dailey said, slamming his gavel.

In September, City Commissioner Jeremy Matlow launched BlueSkyTallahassee.com following the convictions of real estate developer Burnette, which presents six proposed ethics reforms for the City Commission.  During Jackson’s public comments, Jackson also pointed to Matlow being a tenant at his Gaines Street Pies property located on Gaines Street. Burnette, who has dozens of real estate holdings across the city is a part owner of the property, Garages on Gaines. Matlow addressed Jackson’s comments in his response and voiced support for modifying the city’s policies around financial disclosure forms to include business transactions such as landlord information.  Matlow is hosting an ethics reform town hall on October 6th, 2021, to gain public feedback on proposed ethics reforms. Interested parties can RSVP for the event by signing up here.

On Thursday morning following the meeting, Matlow shared a video clip that quickly spread across social media. The video has been viewed nearly 4,000 times as of Saturday evening. Matlow wrote in part: “Porter was silenced and not given an opportunity to participate in a discussion even after repeated attempts to be acknowledged by the Mayor. [The City Commission] is the only forum state law provides for Commissioners to discuss points of view on public business.”

Members of the public commented, outraged at Dailey’s conduct. Among them was former City Commissioner Debbie Lightsey, who commented, “Such arrogance. We can and do expect better conduct than this from our Mayor.” “Unbelievable,” said Leon County Water & Soil Commissioner Jessica Ferris. “We need a new Mayor,” said long-time County Commission aide Gary Zirin. Community activist Stanley Sims asked, “Was this in Russia?”

On Friday afternoon, after close-of-business, Dailey posted a rare apology on his Facebook page. Dailey, described his action – using the pronoun “we,” rather than “I” -in part by writing, “We don’t always live up to the standard we set for ourselves”.

Dailey stated he reached out to Porter to apologize, describing his actions as “adjourning the meeting before she could ask all of her questions.”

Chairman of the Leon County Republican Liberty Caucus, Bill Schack, responded to Dailey’s apology, stating, “The Mayor’s actions were indefensible, and this apology to Commissioner Jack Porter is weak at best. “

Dailey has a big week ahead of him, with his campaign kick-off for re-election on Wednesday, September 29th. The host committee for the event is linked below.

To view the full meeting from this week, click here. 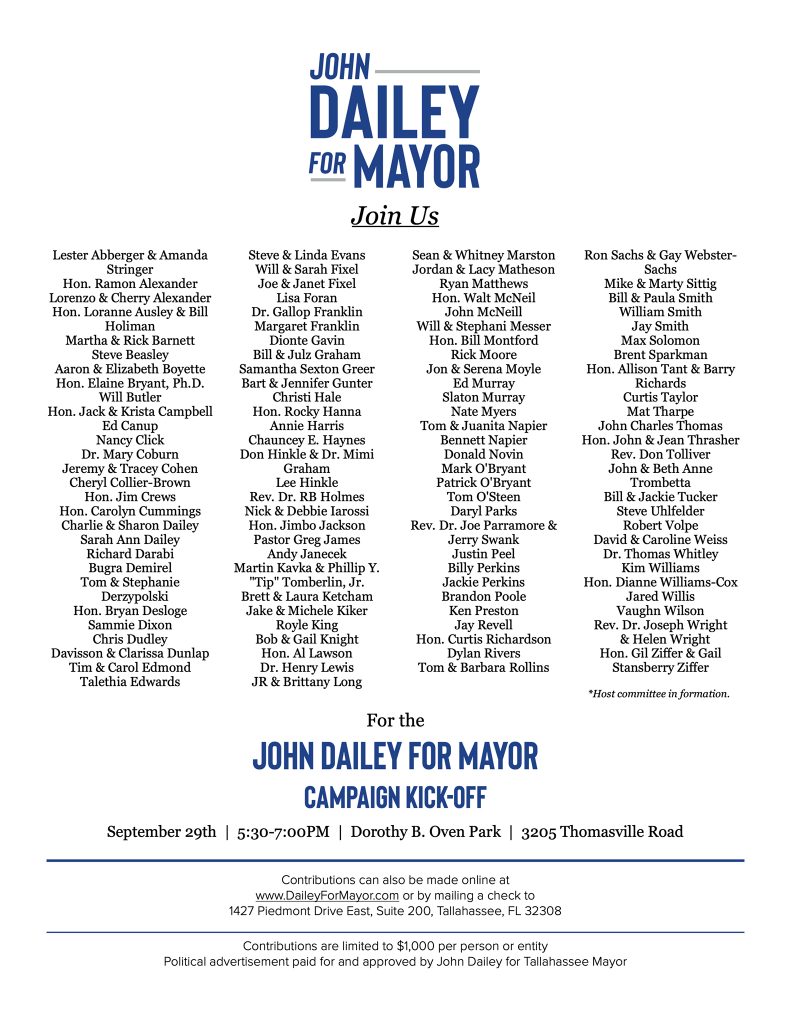