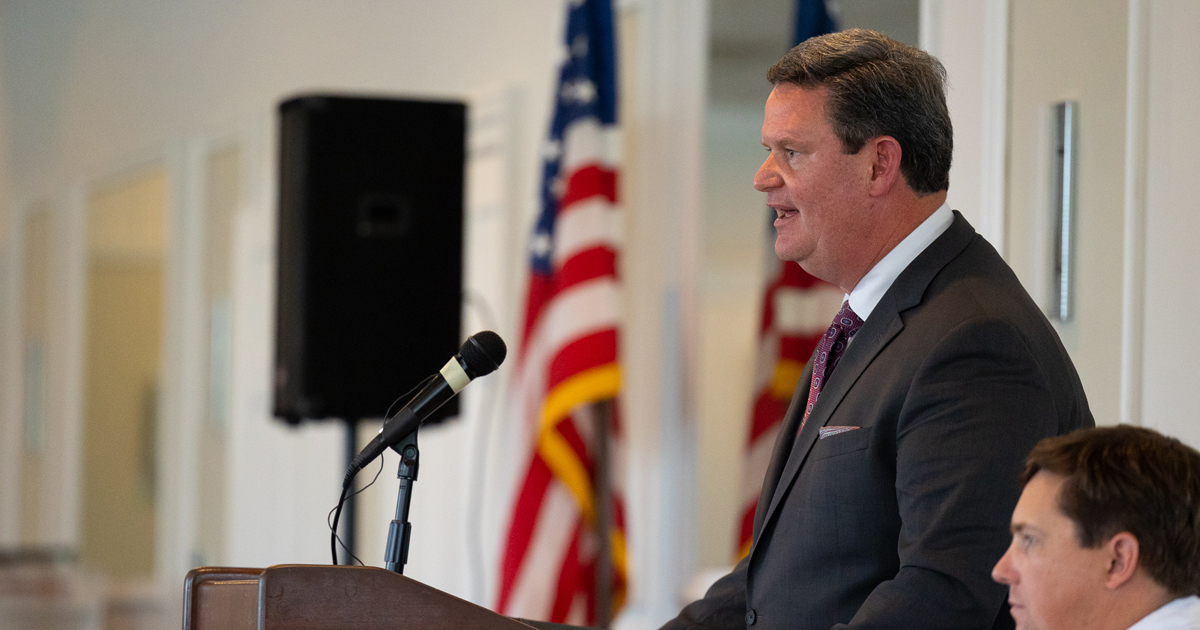 The Tallahassee Mayor John Dailey appeared at the Network of Entrepreneurs & Business Advocates (NEBA) this week and spoke to the group. NEBA had previously endorsed Dailey for Mayor, nevertheless, attendees put forth serious concerns and some tough questions.

The Mayor appeared in the wake of the Tallahassee Democrat’s Karl Etter reporting just hours before that former City Commissioner Scott Maddox had coordinated with political consultant Drew Jones on the hiring of Blueprint Director Ben Pingree. Jones managed Dailey’s Mayoral Campaign, and is his closest advisor through his consulting firm, VancoreJones.

The appearance also coincided with a controversial editorial in the Democrat by City Commissioner Jeremy Matlow, discussing how the community can best move forward as it also digest damming disclosures coming out of the corruption trial in US District Court in Tallahassee.

The Mayor opened his talk with a good news/bad news for the business-friendly audience: millage (property tax) rates will not increase this year. However, increases in real estate prices will result in higher taxes: “I’m not interested in arguing with you on that one,” Dailey said.

Dailey touted the many awards that the City has received during his time on the Commission (although one attendee groaned about the fact that workers paid by taxpayers spend time applying for these awards). Dailey had more news on awards as he announced that he was heading to a press conference to announce his ‘The Tallahassee Awards’, which is an award ceremony of his own that he is launching in the Fall.

ON THE FBI TRIAL:
DAILEY: ‘WE ARE ALL SITTING BACK’

“This is one of those issues, where you don’t just say ‘we’re done.’ No , we need to work continually; we need to continually evaluate. Part of our evaluation will be this federal process that’s going on right now. It’s important to wait for that process to end, see where all those cards fall, and make our judgments moving forward. But we hear you loud and clear.”

Dailey echoed his previous comments in 2019 when he refused to re-bid a contract with WastePro that involved Maddox and possible bribes. Dailey refused to act on the issue, stating at the time, that it wasn’t appropriate to act before the conclusion of the FBI trial.

Speaking to the NEBA audience, he said, “Yes, so as I told you earlier, you’re not going to see your city make a move in any direction while we still have a federal trial going on. It is not appropriate; we need to wait until the end. But yes, we are all sitting back; we are all taking notes.”

ABOUT THAT CITY NO-BID LAND DEAL?
"I ENTHUSIASTICALLY SUPPORTED IT"

Erwin Jackson, a longtime watchdog on local politics, questioned Dailey’s support for the no-bid land deal for Valencia Hotel Group. Dailey was on the winning side of a 3 to 2 vote, less than a month ago, on the City Commission.

Dailey defended the decision to sell the property to the hotelier, for $8 million without a competitive bidding process, citing a five year old appraisal. The Chevron and Johns parcels, bordered by Gaines Street, Martin Luther King Boulevard, and Duval Street, were once considered for a publicly-owned performing arts center.

“In my opinion, that is not the highest and best use for two square blocks in the urban core of Downtown Tallahassee,” Dailey said.

“The city received an unsolicited bid from the Valencia Hotel Group, which proposed to build a four-star hotel in Downtown Tallahassee,” Dailey said. “I enthusiastically supported it.”

Dailey continued, “They decided to bring [that]  unsolicited bid to the City Commission for a full discussion to see where we wanted to go with it, in public, in the sunshine, publicly advertised and discussed.” The procedures the Mayor described are required under state law.

“To Commissioner Matlow’s point bringing it up. Absolutely we should be concerned with unsolicited bids; absolutely, we should look at our policies.” Dailey said.

PROJECT MANGO:
HOW WILL IT IMPACT SMALL BUSINESS' ABILITY TO COMPETE WITH AMAZON?

Peggy Munroe, the owner of Mays-Munroe Appliances, asked about Project Mango. Mayor Dailey supported giving Amazon a $2.5 million tax dollar subsidy to construct a facility, north of I-10 on Mahan Road, in Tallahassee. While Dailey boasted about creating jobs with Amazon’s decision to expand here, this is a rare time a business owner has publicly raised concerns about what Amazon’s impact could be on existing local businesses.

“My question is about Mango, because you didn’t really answer what my concern is.” Munroe asked.  “I own one of the businesses, and even though we pay very good starting wages, and health and retirement benefits, we’re having a hard time hiring. So, what kind of competition can we expect from Mango?”

The Mayor replied briefly, “I don’t have direct knowledge on the specific salaries at all of the different levels on Project Mango. I have heard that I believe that the entry starting salary will be $15 an hour.”

Well-known fiscal and ethics watchdog, Catherine Baer asked about whether Dailey would support the lobbying reforms ordinances as proposed by the City of Tallahassee Ethics Board. The reforms include an expanded definition of lobbying, as well as maintaining lobbyist meeting logs for elected officials.

“Still taking it under review. Not going to give a yes or no on that,” Dailey said.

When asked whether he was going to the Annual Greater Tallahassee Chamber of Commerce Conference, which has generated a fair amount of controversy recently, Dailey responded  “Yes. You will see me in Amelia Island.”