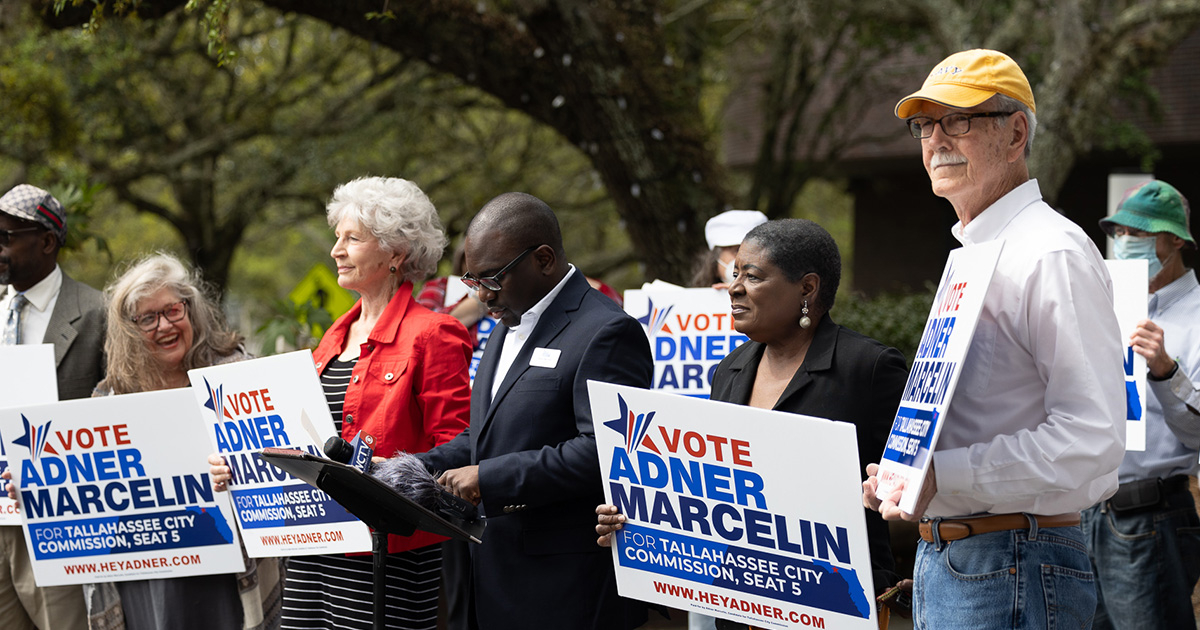 Adner Marcelin, candidate for Tallahassee City Commission Seat 5, and his supporters were all smiles before kicking off his campaign on Wednesday at a press conference outside City Hall. Around twenty supporters joined Marcelin, including high profile former City and County Commissioners whose endorsements have swung previous elections for progressive candidates.

“At the end of the day, it’s about basic right and wrong,” Marcelin said, opening his speech.

“We need the moral clarity, and it starts with a change in leadership,” Marcelin said. “The people of Tallahassee have tried reasoning with our City Commissioners in every way possible,” Marcelin explained.

“But over the last year, the public has pleaded its case time and time again… we’ve only been ignored,” Marcelin said.

“We spoke out about an obscene $27 million dollar giveaway of sales tax dollars going to football stadiums while those in poverty continue to be ignored,” Marcelin said of recent Blueprint spending on the Seminole Boosters deal.

“We objected strongly to land-use decisions being made in the interests of a handful of developers and landowners, while the public and the voters are continually shut out of the process,” Marcelin said, referencing controversial developments like the Welaunee Plantation land deal.

Marcelin ended his remarks with a reminder of the grassroots successes made to date in local elections in the past few years. Marcelin himself contributed to those wins, he endorsed Jack Porter in her successful 2020 race for City Commission.

“Our recourse must be at the ballot box, just as it was in 2020,” Marcelin said.

Adner’s contact information can be found on his campaign page at HeyAdner.com